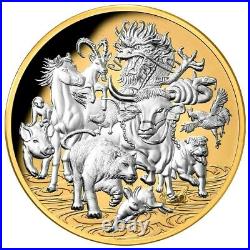 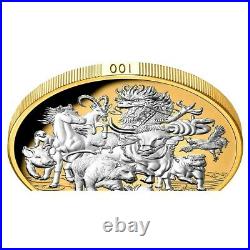 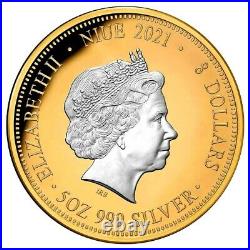 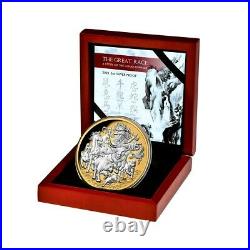 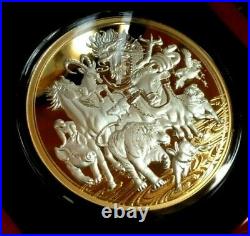 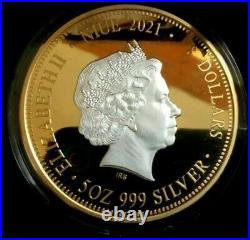 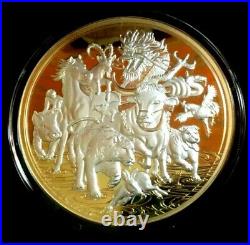 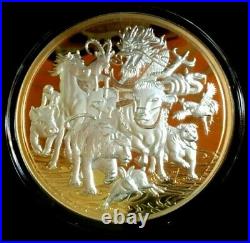 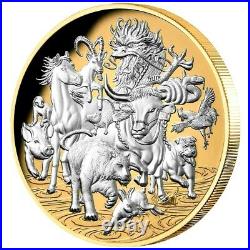 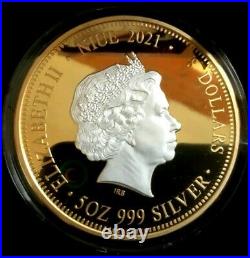 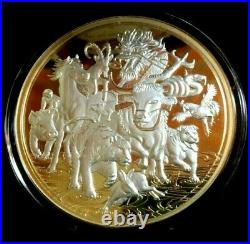 Complete with a numbered Certificate of Authenticity. Individually edge-numbered matches the Certificate! Struck to Proof quality from a whopping 5oz of 99.9% pure silver, with BOTH sides plated in gold, this official legal tender coin is a commanding tribute to the origin of the Chinese Lunar Animals. A STUNNING WORK OF NUMISMATIC DESIGN. Depicting the twelve Lunar animals racing across the river to determine the order of the Lunar cycle, the fully struck-up motif contrasts brilliantly against the shimmering gold-plated backdrop.

In an unusual and inspired twist, the Ian Rank-Broadley portrait of Queen Elizabeth II is also set against a stunning gold-plated background field. Very exclusive, the limited edition has been set at a lucky 888 coins! Featuring edge-numbering that matches the numbered Certificate of Authenticity, each of those coins is beautifully presented within a plush case. Dont miss this limited window of opportunity it will soon slam shut. THE STORY OF THE GREAT RACE.

There are many varieties of the lunar animals origin story. Some say that the Jade Emperor called a race of animals on his birthday to create the Chinese Zodiac. Others say that it was the Buddha who called the race. Both stories are similar with minor variations. Twelve animals were to become symbols of the Chinese Zodiac and in order to secure their place, would race across a rapidly flowing river.

Although the worst swimmer, the rat was very smart. The ox had agreed to carry the rat across the river on its back, but as they reached the shore, the rat jumped off the ox and finished first. The ox was second, with the tiger in third.

The Rabbit hopped from one stone to another and was doing well until he slipped. Fortunately, he grabbed onto a log and finished in fourth place. In fifth place came the dragon, who would been first but had stopped to help some villagers.

On its way to the finish line the dragon saw the rabbit on the log and gave a puff of air to help it to shore. The horse looked set to finish sixth, but the snake slithered out of the long grass, scared the horse, and took sixth place instead. The monkey, rooster and sheep found a raft and, working together, paddled through the strong currents and the weeds until they reached the shore.

The sheep came in eighth place, the monkey in ninth, and the rooster in tenth. The dog had been too busy splashing in the fresh water, and finished in eleventh place. The pig was the last animal to cross the line as it had stopped to eat and fallen asleep. Thus it was decided which animals would form the 12-year cycle of the Chinese Zodiac, and in what order. If you have delisted my item and request cancellation, an unpaid item case may also be opened at my discretion.

Your items will eventually be delivered. Thank you for your understanding and continued support. The item "Great Lunar Race 2020 $8 5oz Silver Proof Coin Selectively Gold Plate" is in sale since Saturday, October 3, 2020. This item is in the category "Collectables\Limited Editions". The seller is "fortymillion007" and is located in Devonport, Tasmania.