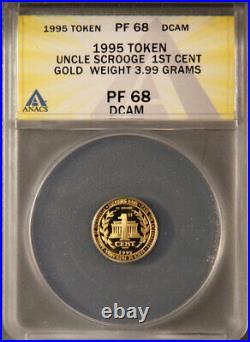 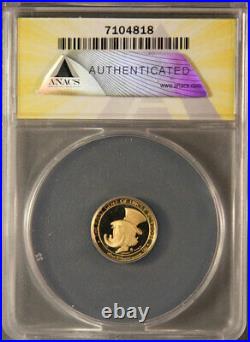 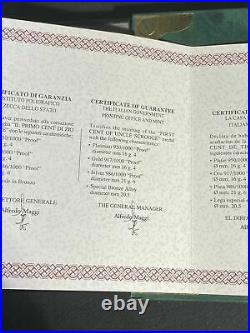 1995 Italian Disney Gold Token "Uncle Scrooge's 1st Cent" ANACS PF 68 DCAM. This coin is a stand-out example of Italy's entry in the Disney'commemoration gold coinage' sweeping the world. Niue's Disney collection series are probably the best known (and available) followed by a private mint's (Rarities) but no one to my knowledge has chosen to honor Uncle Scrooge other than Italy. Scrooge McDuck is a cartoon character created by Carl Banks for The Walt Disney Company initially appearing inDisney comics.

Scrooge is an elderly'duck' who typically wears a red or blue frock coat, top hat, pince-nez glasses and spats a refined gentleman. Named after Ebenezer Scrooge from the 1843 novella A Christmas Carol , Scrooge is incredibly wealthy and a self-proclaimed "adventure-capitalist".

His dominant character traits are his wealth, frugality, and tendency to seek more wealth through adventure. He is the maternal uncle of Donald Duck, hence the moniker'Uncle. Although initially characterized as a greedy miser (as Charles Dickens' original Scrooge was), as time passed he has often been portrayed as a thrifty hero, adventurer and explorer. Like other Disney franchise characters, Scrooge McDuck's international popularity has resulted in literature that is often translated into other languages. Comics have remained Scrooge's primary medium, although he has also appeared in animated cartoons, including a long running television series entitled Duck Tales.

The coin is minted by the Italian Government Printing Office and Mint (Istituto Poligrafico E ZeccaDello Stato) which traces its roots to 269 BC. Although the mint is primarily housed in a lovely turn of the 20th century building, it is ultra modern, capable of producing. I love this coin but have acquired a higher graded version and make this one available to free space in, and raise capital for, further development of my overall collection. Thank you for considering this well struck, beautiful gold piece containing 3.99 grams of 0.9167 gold. The item "1995 Italy Disney Gold Token'Uncle Scrooge's 1st Cent' PF68DCAM by ANACS" is in sale since Sunday, April 25, 2021.